Humboldt County Office of Education’s Student Events team was disappointed not to be able to hold the Doris Niles Humboldt County Science Fair in 2020. We know many students were well along on their projects when the event was regrettably cancelled. So we created a gallery where students can show off their work! 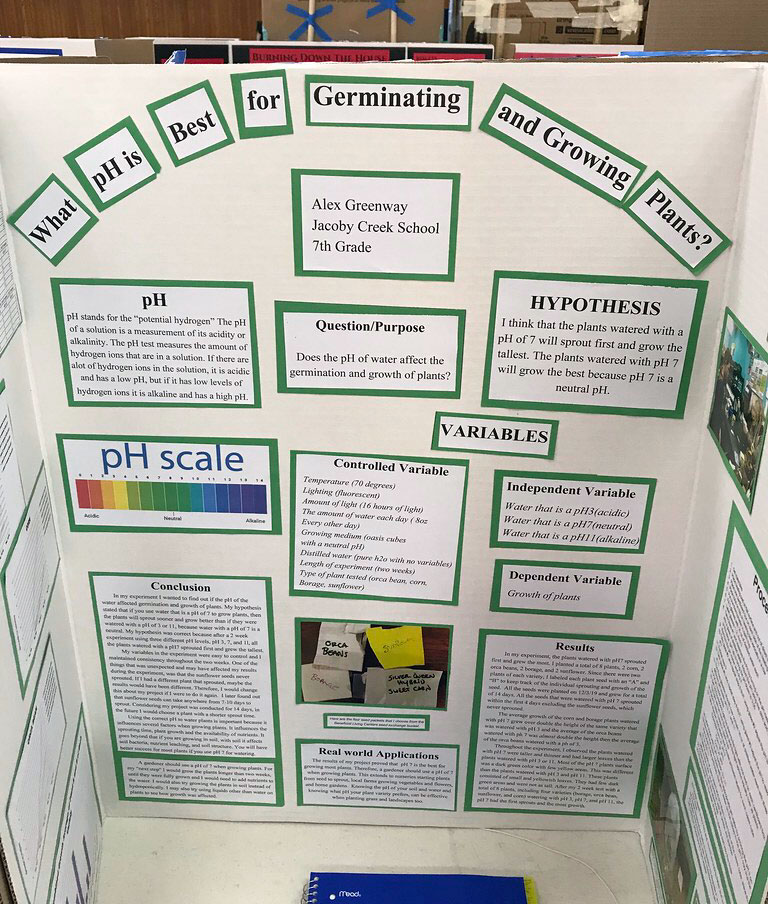 I think that the pH 7 will sprout first and grow the tallest. The plants watered with pH 7 will grow the best because pH7 is a neutral pH

My hypothesis was correct because after a 2 week experiment using three different pH levels, pH 3, 7, and 11, all the plants watered with a pH7 sprouted first and grew the tallest.

One of the things that was unexpected and may have affected my results during the experiment, was that the sunflower seeds never sprouted. If I had a different plant that sprouted, maybe the results would have been different. Therefore, I would change this about my project if I were to do it again. I later found out that sunflower seeds can take anywhere from 7-10 days to sprout. Considering my project was conducted for 14 days, in the future I would choose a plant with a shorter sprout time.

Using the correct pH to water plants is important because it influences several factors when growing plants – sprouting time, plant growth and the availability of nutrients. It goes beyond that if you are growing in soil, it affects soil bacteria, nutrient leaching, and soil structure. You will have better success for most plants if you use pH7 for watering. 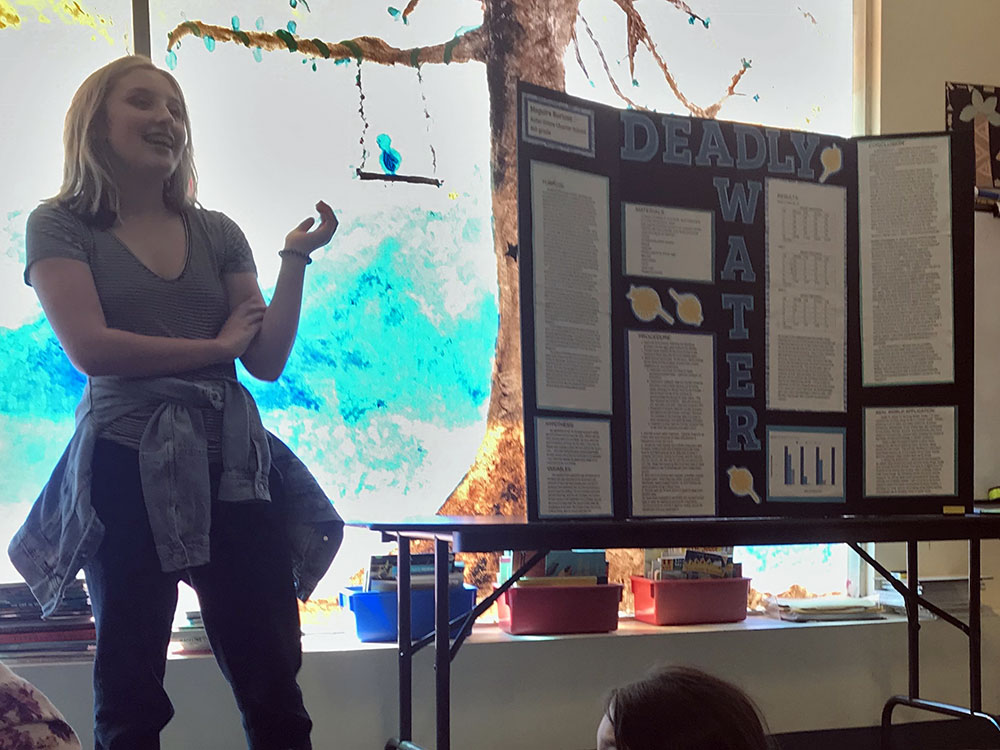 Does storing water in plastic bottles impact its quality?

Maguire saw a drastically lower survival rate in brine shrimp raised in water that had been heated in a plastic bottle. 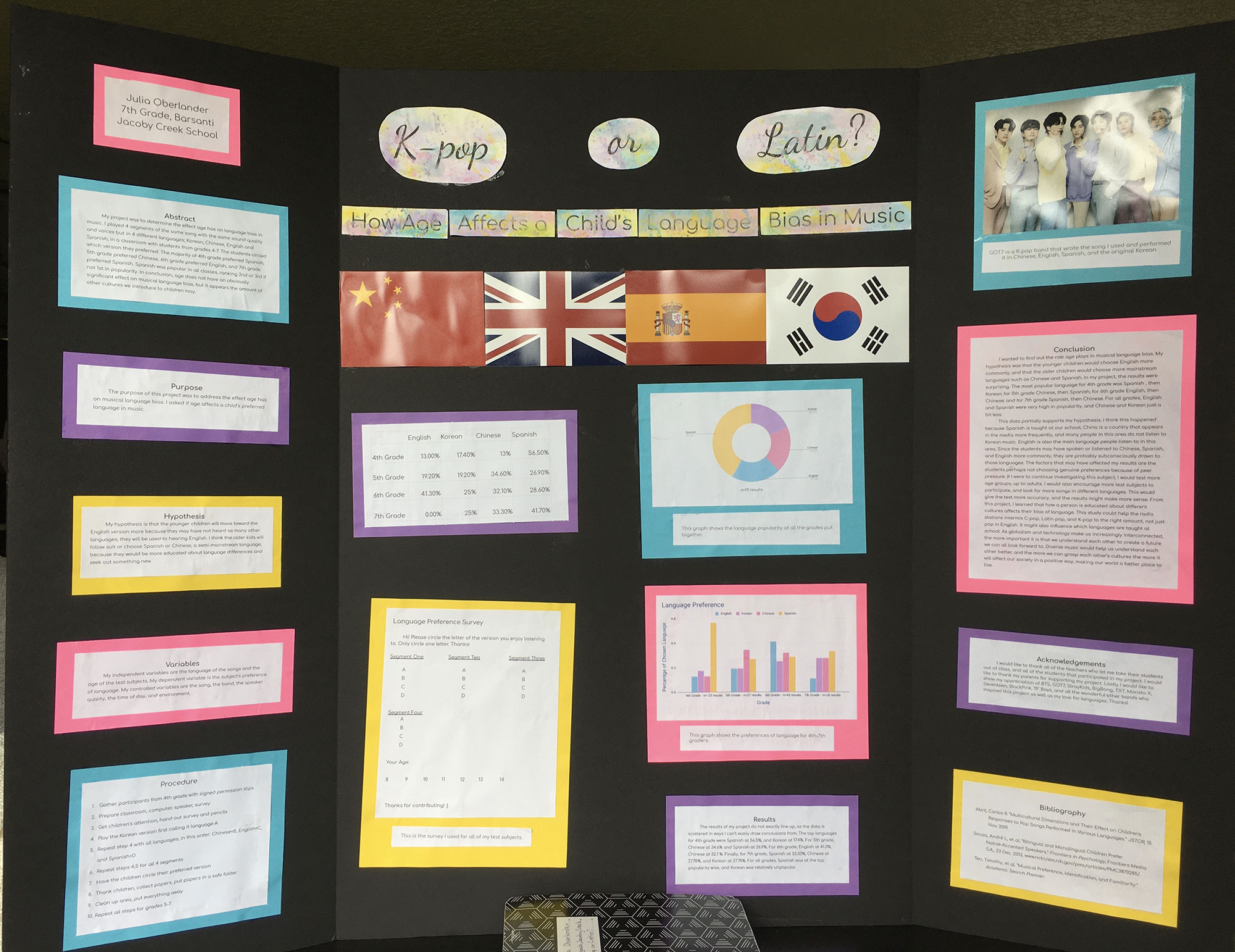 K-pop or Latin? Does Age Affect a Child's Language Bias in Music?

I think younger students will move toward the English version more because they may not have heard as many languages, they will me more used to hearing English. I think that the older kids may follow suit, or choose Spanish or Chinese, semi-mainstream languages, because they would be more educated on language differences and seek out something new.

The results were surprising. The most popular language for 4th grade was Spanish, then Korean; for 5th grade Chinese, then Spanish; for 6th grade English, then Chinese; and for 7th grade Spanish, then Chinese. For all grades, English and Spanish were very high in popularity, and Chinese and Korean just a bit less.

This data partially supports my hypothesis. I think this happened because Spanish is taught at our school, China is in the media more frequently, and many people in this area do not listen to Korean music. English is the main language people listen to in this area. Since students may have spoken or listened to Chinese, Spanish, and English more commonly, they are probably subconsciously drawn to those languages.